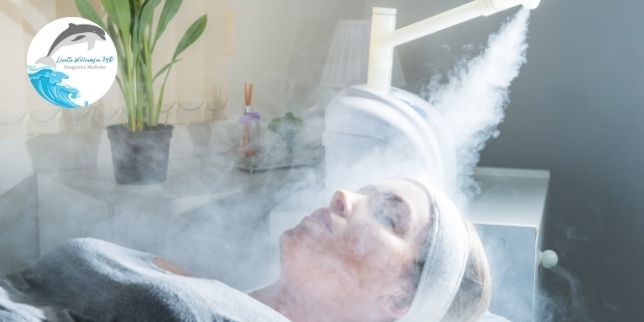 What Is Ozone Therapy?

Ozone gas (O3) discovered in the mid-19th century is a colorless and odorless gas consisting of three atoms of oxygen. The oxygen used for clinical use is a medical grade, given in specific therapeutic doses and never via inhalation. IV ozone therapy has been well-documented and used to treat chronic infections, wounds, Lyme Disease, rheumatoid arthritis, cancer, ulcerative colitis, lupus, and as many as one-hundred and fourteen diseases! In the 1800's, Nikola Tesla patented the very first ozone gas generator in the United States, eventually starting the "Tesla Ozone Company". During World War I, physicians applied ozone treatment to wounds topically for its anti-inflammatory and anti-bacterial properties and were later able to disinfect drinking water to be used as a spray or compress in dental medicine.

As the ozone purifies the air we breathe, it also serves as a detoxifier for our bodies by selectively attaching and eliminating bacteria, fungi, parasites, mold, yeast, and virus. Ozone therapy may even assist our bodies in removing toxic metals. Very impressive for something we take for granted daily.

Ozone therapy increases the production of cancer-fighting compounds and strengthens different parts of the immune system that are suppressed by chronic infection and cancer. Ozone therapy helps prevent the growth of human cancer cells from breast, lung, and uterus by 40-90%. Better yet, ozone therapy selectively damages cancer cells without causing damage to healthy cells!

More than forty-five thousand doctors in over fifty countries across the globe have merged ozone gas (O3) with medical grade oxygen (O2) to effectively treat individuals with Lyme disease, ulcerative colitis, fibromyalgia, diabetic ulcers, rheumatoid arthritis, HPV, and Hepatitis B and C. This is not even half the list of what ozone therapy can do for your health!

When used as preventative care, ozone might help protect you from illness and also strengthen your body's natural defenses. Words spoken by Benjamin Franklin, "An ounce of prevention is worth a pound of cure," isn't far from the truth. Preventing illness is much easier than treating it. Unfortunately, in the fast-paced world we live in today, we are exposed to a large amount of chemicals. These chemicals can not only be in the food we eat or the water we drink, but also in the air we breathe. The human body is largely made up of oxygen, an element we commonly forget to think about when it comes to having better overall health. According to Dr. Otto Warburg, "Cancer is, fundamentally, a relatively simple disease where cell oxygen levels fall to a level sufficiently low enough for the cell to change in nature". The decline of health and the growth of disease in the US can be directly related to the increase in toxins and reduced levels of fresh oxygen. With our busy lifestyles, breathing in the reduced levels of oxygen and increased toxic fumes in the air further weakens our immune systems and results in disease.

Ozone therapy's many therapeutic properties have been used to help treat numerous ailments, including autoimmune disease.

In a study of patients with diabetes, ozone therapy improved controlled blood sugar levels, substantial improvement of lesions without side effects, and less amputations than the controlled group. In individuals with other autoimmune diseases such as ulcerative colitis, rheumatoid arthritis. lupus, and Lyme disease, ozone therapy can help reduce inflammation, speed up damaged tissue recovery and reduce pain

In the body, ozone gas is converted to hydrogen peroxide and hydrogen peroxide probably is the main component for the therapeutic effects. It is a strong oxidant that has the potential to produce antioxidants which are useful in preventing cancer. In studies, hydrogen peroxide has been used to cause death of cancer cells. Because healthy cells can not survive under a stressful environment for prolonged time periods, ozone therapy boosts antioxidant enzymes to cause death of cancer cells and yet helps survival of healthy cells.

Now, you understand the many benefits of ozone therapy and how it functions, but, you may be asking yourself, "Is ozone therapy safe?". The answer is "Ozone therapy is safe when done properly". Ozone therapy has been used and studied extensively for centuries, with its results being shown to be secure with minimal adverse effects. Under strict supervision of a professional, ozone therapy will not just help in preventing and treating numerous disorders but can be an effective improvement to your overall health!

For Ozone Therapy in Oceanside, call the clinic at (760) 875-2627 or visit our website at LinetteWilliamson.com and schedule your appointment today!